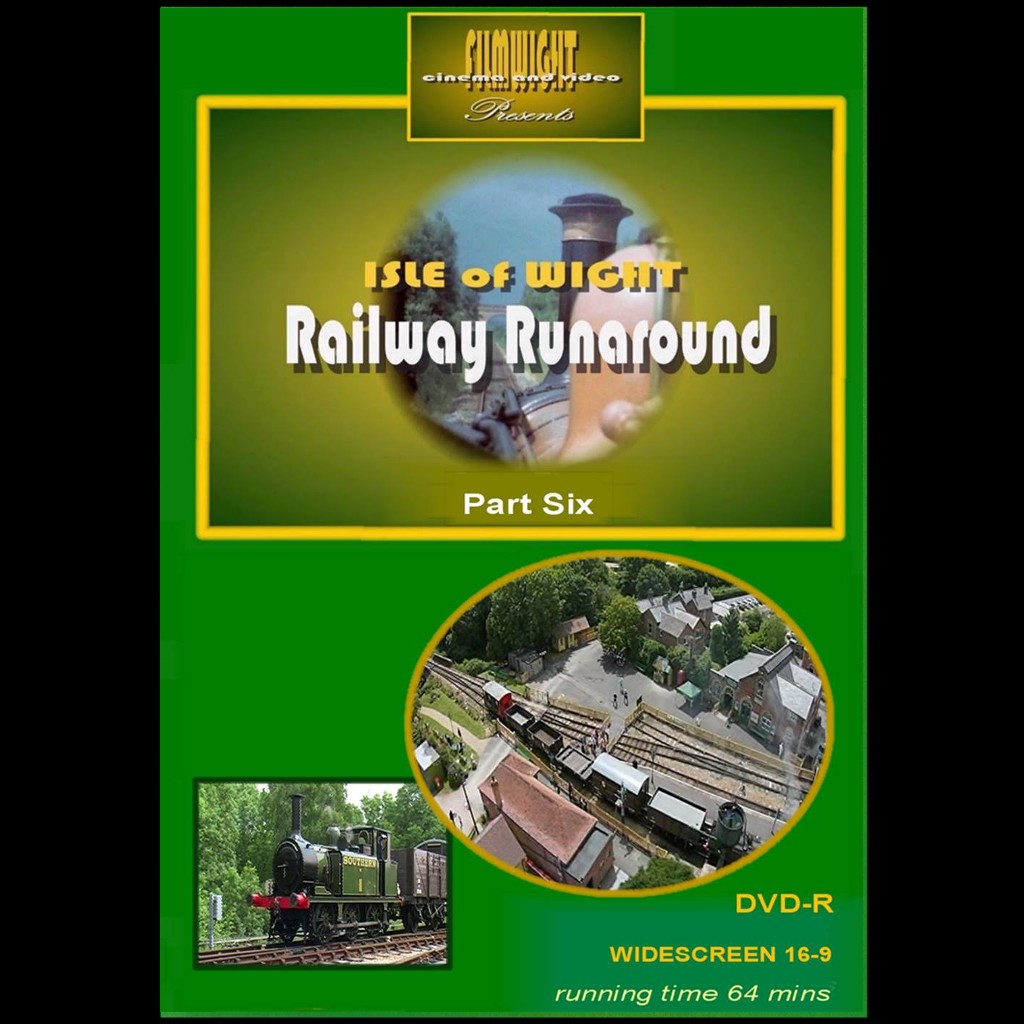 Terrier to Wootton – Opening of Train Story – Heritage Goods Train – Ivatt Returns to Steam and Journey from Ryde to Ventnor, all featured on the lastest DVD in the Railway Runaround series from FilmWight.

At long last the eagerly awaited Railway Runaround part six is now ready. Our series of DVDs depend on the timing of events as they occur, so everything is like waiting for a bus, nothing happens then three come along at the same time. Such was the case with Train Story, the Goods Train and the much anticipated steaming of the magnificent Ivatt 2MT at the Isle of Wight Steam Railway.

Our DVD starts with a look back to how things were in the early 1980s, my first film, all shot on 16mm stock and now digitally frame scanned to maintain the image quality. “Terrier to Wootton” was originally released by DCR films of Sandown and was sold as an 8mm packaged movie. Things have moved on since those early days, so the opportunity was now here to take a fresh look at the now vintage archive material. The original music track has been replaced with added sounds and an informative commentary.

Since our last DVD, John Bartlett, the other trustee of The Isle of Wight Film Archive, joined the film production team. This has proved a great help, with the option of a second camera when covering events like the opening of Train Story. It was on the 6th June that the big day had finally arrived, everything was in place to cover the event, it was a good idea to get all the camera positions and sound system in place ahead of the day. The Victorian Train now looking at it’s very best headed by “Calbourne” completed splendidly the whole scene of cutting the ribbon and leaving the platform. The handing over of the wagon from the NRM to our railway also recorded for our archives of film. All the short speeches have been included, accompanied by the visuals of Train Story.

The next item on our DVD is the Heritage Goods Train, splendidly hauled by our Terrier W11, looking superb in it’s early Southern livery. This part of our DVD has brought a whole new dimension to our film making with the addition of a third member of our team, Richard Manser who is responsible for some excellent aerial footage from his drone camera. We also had the opportunity of filming W11 from the brake van when coupled to the locomotive, giving the impression that we were almost sitting on the front buffer beam and the sound was pretty good too.

The Island railways had never seen such a big and powerful locomotive, as the Ivatt 2MT on it’s tracks before, so we have something of a scoop, capturing those exciting first public passenger runs on September 22nd and 23rd 2015. What amazing days they turned out to be, on the last day with the weather factor, a major contributor, we had everything going our way to secure some wonderful action shots. The Ivatt certainly, looking better than at any time during it’s BR working days, a brilliant restoration achievement, now available for all to see. With such a reliable spell of good weather, we had a fantastic opportunity to get the actual shots we needed to show off the Ivatt, although it did involve a lot of running to and from the various locations all in one day. The Ivatt certainly played it’s part and with wall to wall sunshine, we had everything going for us.

Our last item on the DVD, an amateur film made in 1963. The journey from Ryde to Ventnor has been covered many times on film. I feel that this little film was well worth including in our series. Normally I do not use 8mm film as the quality is inevitably below our usual standard, however I feel this will be worthy of inclusion. A young film maker in his early teens, took enormous efforts to cycle down from London, carrying not only camera and tripod, but also reel to reel tape recorder equipment to realise his ambition to record the last days of steam on the Island. His very worthwhile result was that the film won a place in The Ten Best Film Awards for 1969. To achieve such a high standard of film work with the basic equipment available at that time has to be admired. Due to copyright restrictions on the music track it had to be replaced with a commentary giving some historical information about our Island railways. I had discovered the film on YouTube and felt it should be available for us all to see. I finally tracked down the film maker, Paul Plowman who now lives in Australia who agreed for the film to be in our series.

Isle of Wight Railway Runaround, now with it’s sixth edition, is very much the continuing story of the progress of the Isle of Wight Steam Railway, for today’s films are tomorrows history. It is essential that the series continues to record all the major events, which is the reason behind the expansion of our team. What will tomorrow bring? Well there will certainly be the other Ivatt when restored and back on the Island as well as the continuing story of vehicle restoration and maintenance. Then what will ultimately become of our other railway from Ryde to Shanklin, will we be able to return steam to Ryde St Johns.

Perhaps the next edition of Railway Runaround might reveal even more, we will certainly be there to record it.