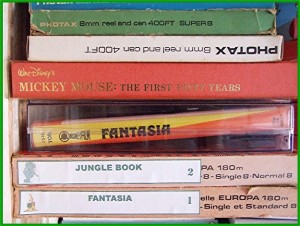 I sat in my film room the other evening surveying my collection of Movies, Super 8mm, 16mm, 35mm, 9.5mm, VHS, DVD, Package and homemade, reminiscing on what spark ignited my interested in all aspects of this fascinating hobby. My favourite film is the Walt Disney animated version of “The Jungle Book”. Every time I hear “The Bare Necessities” the memories come flooding in and I am transported back to the Regal Cinema in Shanklin, Isle of Wight, where I first saw the film on Thursday May 9th 1968. 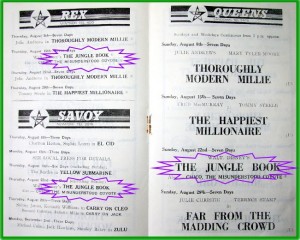 You may wonder how I can be so sure of the date; well, in those days instead of keeping a diary I kept a yearly scrapbook and in its pages can be found cinema tickets, posters, programmes, newspaper clippings and all the ephemera that went to make up that year of my life. The Scrapbooks are mainly filled with cinema tickets, as in those days I was an avid cinemagoer. I can only vaguely remember the content of some of the other films that were showing in 68’, The Scalphunters, Carry on Doctor, South Pacific and Ulysses, but I can clearly picture every scene and sing every word of the songs in Jungle Book. That summer I saw the film with a friend 64 times, yes that’s right 64. In those days cinemas had continuous performances and you could come and go as you pleased. After that first Thursday evening we went again on the following Saturday and sat through three screenings of “The Jungle Book” at a cost of 7/6d each. At that time there were six cinemas on the Island belonging to the same group, Star Entertainments, and we were able to follow the film week by week around the circuit; attending once on a Thursday night and three times on Saturdays. 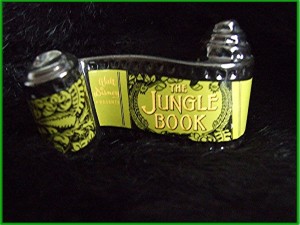 The summer season came to an end and with it the closure of half the Island cinemas, which were mothballed until the following spring. Luckily I purchased a Disneyland recording of the film soundtrack so was able to spend the winter months listening to the music with the dialogue and joining in ‘I wan’na be like you’, ‘Trust in me’, and ‘Colonel Hathi’s March’, as well as my favourite – ‘The Bare Necessities’. I had to make do with the sound only for another five years, until one glorious day I discovered Super 8mm package movies in a local photographic shop I passed on the way to work each day. There in the window was a 200ft extract from “The Jungle Book”. Unfortunately I had to be at work by 8am and the shop did not open until 9am. The week dragged by but finally, on Saturday morning I entered the shop with my savings to purchase the film and a projector. That evening the film was laced up and once again there was Bagheera carrying the baby Mowgli to the family of Wolves and Shere Khan, the Tiger, fighting with Baloo; then it was over. What a disappointment. Where was Kaa the Python, Colonel Hathi the Elephant and King Louie; and where was my favourite sequence? Baloo teaching Mowgli the bare necessities of life. 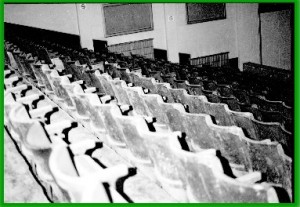 The Spark is Ignited

I was new to film collecting and naively thought that cinema films were readily available to buy if you knew where to look. I went back to the photographic shop and soon found out this was not the case. They put me in touch with Dave West of D.C.R. Films, who lived round the corner from me, and he managed to obtain a copy of the other extract in Super 8mm, “I wan’na be like you” where Mowgli is taken to the ancient ruins by the monkeys to meet King Louie and is eventually rescued by Bagheera with more hindrance than help from Baloo. I had to be content with these extracts for another couple of years until “The Jungle Book” did the rounds of the cinemas again. In the meantime I built up my collection of Disney cartoons, invested in a cine camera and started making animated movies. The spark had been ignited .  I had to travel off the Island to see “The Jungle Book” on the big screen again. It was showing at the Odeon, Southsea. I was only able to see one screening on Sunday 21st December 1975 as at that time of year boat connections to and from the Island were few and far between. But it was worth the extra expense and travelling time just to see and hear the complete film once more. The next time I paid to see the film was on Monday 2nd August 1976 for 95p at the Commodore Cinema in Ryde on the Island. 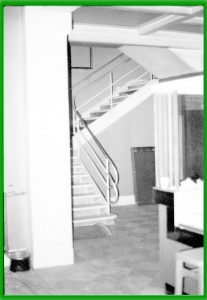 My two extracts had been shown hundreds of times over the years and were well worn so in 1985 I purchased new copies and was also lucky enough to obtain a third extract “The Elephant March”. This shows Colonel Hathi and his pachyderm parade and includes a snatch of “Colonel Hathi’s March”. These three extracts and a trailer, which includes a tantalising glimpse of the Bare Necessities, are spliced together and reside on a shelf in front of me as I write.  “The Jungle Book” was not shown on general release on the Island again and one by one the cinemas closed down. We were left with one screen and the chance of ever seeing the complete film one more time seemed lost forever. But fate had a surprise in store. I had teamed up with another film enthusiast to start showing films at the local community theatre. We hoped to replace the lost cinemas and bring back the art of quality presentations to the Island. Starting with 16mm on Monday nights we soon persuaded the local authorities to purchase and install a new £20,000 35mm projector in the theatre so we could present current releases three nights a week. We could have filled the place every night; but, being a community theatre, the place was used for other events. 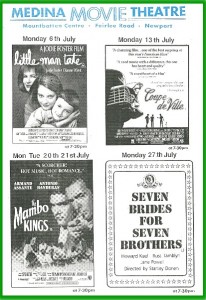 We kicked off with a restored 35mm print of “Gone with the Wind” and over the years showed all the classics as well as current releases and I had the pleasure of projecting many quality films, The English Patient, Mrs Brown, Titanic, Batman, Oh Mr Porter, to name just a few. During this period “The Jungle Book” did the rounds one last time and we booked it to show to 800 Cub Scouts, over two screenings, plus one public show on October 27th 1993. I was in heaven. To make up and project my most favourite film of all time was a pleasure not to be missed. This was the last time I saw the film on a cinema screen and, sadly, thought I would have to be content with my Super 8mm extracts until I could afford a 35mm print (if one ever became available and I had the means to show it). 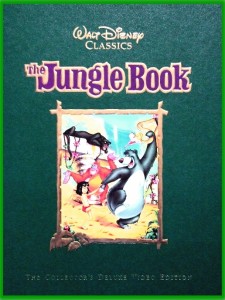 That’s how things would have stayed, but for the advent of video. I always said I would never be in favour of films on video and when Disney started releasing all their animated films in that format I resisted the urge to purchase them. That was until they released “The Jungle Book”. What could I do? I had to have it. A special VHS edition with a soundtrack CD and a still from the film. 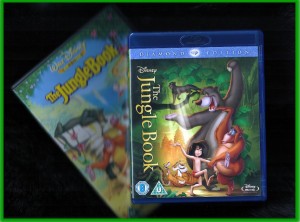 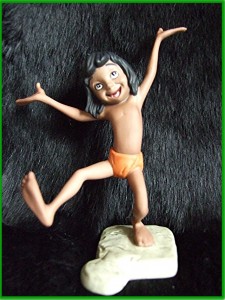